By: Jacob
In: Currency
Tagged: A, At, Closer, currency, Emerging, Instability, Look, Market 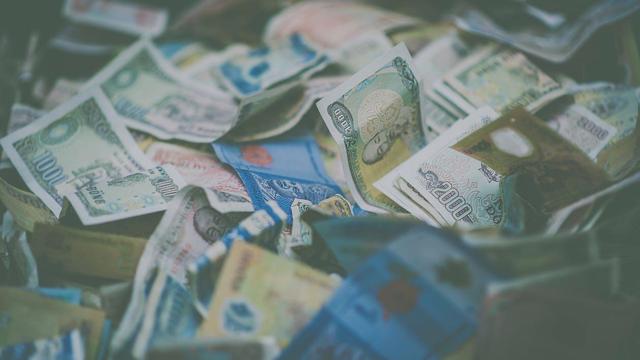 Currency market volatility has been a consistent problem in emerging markets. Year after year, currencies are devalued in an attempt to boost economic growth but only serve to worsen external debt problems.

Last year was particularly bad as we saw major declines in the Turkish lira, Argentine peso, and the Brazilian real, not to mention the complete collapse of the Venezuelan bolivar. This year has been a mixed bag; besides the 25% overnight decline in the Argentine peso, there has mostly been slow downward trends or a “pause” in currency volatility. Now that many feel EM currencies are stronger, I fear that there may be another round of devaluations.

As someone who focuses on international investing, currency market instability is incredibly important to my portfolio. Many EM countries like Argentina (ARGT) have great growth potential and are very cheap, but have such awful monetary policy that the risks outweigh the rewards.

Let’s take a close look at EM currency performance and try to gauge the causes and outcomes of their ongoing weakness.

Importantly, the traditional “dollar index” has absolutely no weight toward emerging market currencies. Certain currencies such as the Chinese yuan are likely more important for modern financial markets than the euro or the yen which dominate the over 40-year-old dollar index (UUP).

To fix this, I’ve created what I call the “Emerging Markets Dollar” which is an equal-weighted measure of most of the floating (managed or otherwise) EM currencies. Some may say “Why Equal Weighted? Should it not be trade weighed?” Personally, I believe that equal weighting is always best because it cancels out more noise. Yes, overweighting the yuan would be “more accurate” from a balance of trade perspective, but I am more interested in EMs as a whole and not any particular nation.

Here is the basket of currencies:

I’m sure that there are one or two major EM currencies that I’m missing, but this group represents most of the major ones that have made the news. Also, some will argue that South Korea and Poland are hardly EMs anymore which is technically true, but they do have the monetary problems of EM countries.

Here is an admittedly ugly chart of the performance of these currencies over the past five years when most of these monetary problems first began: 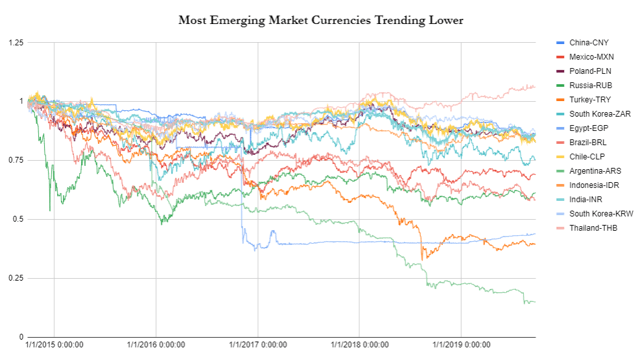 As you can see, most of these currencies have been trending lower with the notable exclusion of the Thai Baht. Problems seem to have begun in the Russian ruble likely due to the collapse in oil prices that also saw the U.S. dollar initially strengthen.

The Argentine peso has been worst off as the country’s leaders have generally taken a very poor approach to monetary policy and have an awful track record of defaulting. This is also true with Turkey which is the second-worst performer overall.

To see the picture more clearly, let’s combine all of those currency performances into a single equal-weighted index.

Take a look at this “Emerging Markets Dollar Index” vs. the traditional eurocentric index: 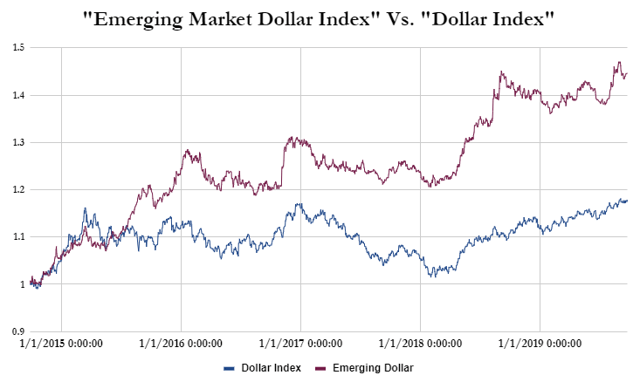 As you can see, this index has been rising much faster than the traditional “dollar index” (UUP) and spikes higher when EM currency devaluations increase (as seen in 2018). To me, this chart looks very bullish and is signaling another round of weak performance in EM currencies compared to the U.S. dollar.

To see this very clearly, we can divide our “EM dollar” index by our “Developed index” to create a “Developed currency to EM currency” index. Doing so cancels out the impacts of the U.S. dollar and lets us clearly see how EM currencies are performing compared to developed world currencies.

For me, the key to market analysis is canceling out the noise. We live in a noisy world and it is much easier to understand it when chaotic interference is removed. This index removes most noise and lets us see directly the trend against emerging market currencies.

Take a look below: 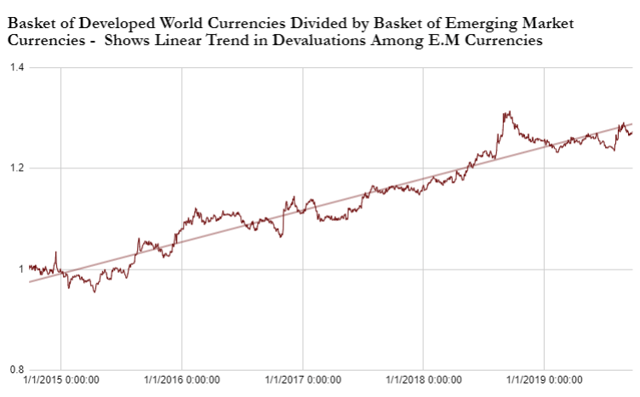 As you can see, there is an alarmingly linear trend against EM currencies. When currencies break down more than the trend line would expect as in last fall, the currencies quickly move back to their trend line. I expect this pattern to continue in the future and hope that it does not end with more Venezeula type situations. The South African rand in particular looks like it is headed for another devaluation.

Interestingly, if we remove the linear trend from the above chart (make residuals) and flip it over, we can create a bit of a leading/trend indicator for the stock market. So, when developed world currencies outperform emerging market currencies more than expected, equities tend to fall and vice versa. This is speculative and relatively technical, but I still find its historical indicative power fascinating: 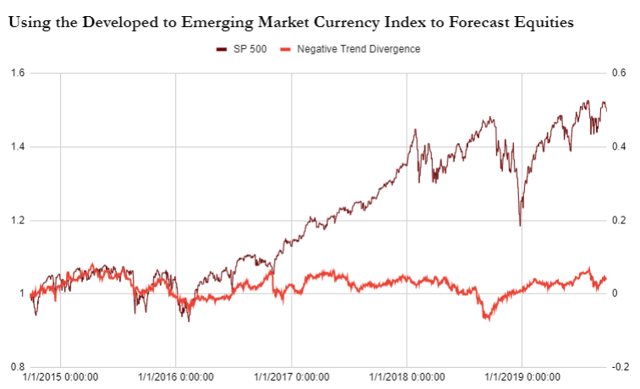 As you can see, when the red line is negative it is usually bearish for equities and when it is positive (2017 to mid-2018 and 2019 YTD) it is bullish for equities. We can also see that it led the fall crash last year by about a month and a half. Importantly, the index is strong now but looks to be headed back to negative territory which signals a correction in equities.

As will be explained in-depth below, it seems that EM currency instability is the leading cause of financial instability (in equities and bonds) because it is a drain on financial liquidity.

A Few Unresolved Causes of The Declines

There are many reasons emerging market currencies have been hit particularly hard over the past few years. One major point is that most of these countries have the opposite problem as those in the developed world: too much inflation. Like Europe, the U.S., and Japan continue to lower interest rates to raise inflation, these countries have been raising them to stop it.

As an extreme example, Argentina currently has a staggering interest rate of 81%. If that does not bring its 53% inflation rate down, nothing will.

It All Ties Back to Debt

The problem is deeper than inflation though, it is largely a debt and trade problem. After the amazing 2000s rally in emerging market equities, capital flows have dropped considerably and creditors have demanded new debt to be priced in developed market currency (usually the U.S. dollar) in order to stop countries from printing money to pay off debt.

Even more, excessively low-interest rates in developed economies have allowed these countries very cheap money. Since 2008, the external debt to GDP (debt priced in foreign currency) of most emerging market countries has doubled or tripled. Frankly, nobody knows exactly how much dollar-denominated external debt is in the world due to the fact that a large portion of it is in private banks that have been borrowing dollars. In China, in particular, there is estimated to be over $2.25 trillion in dollar-denominated debt in the country’s banking sector. That does not even include its many shadow banks.

The core problem with this form of debt is, although its low-interest rates are attractive to foreign borrowers, it creates a vicious feedback loop that is harming the entire global financial system. If an EM with high external debt sees higher inflation or devalues its currency, dollar-denominated debt is effectively higher in local currency. This causes many borrowers to rush to buy U.S. dollars to stop the bleeding, which only pushes the greenback higher and worsens the situation.

This has been taking liquidity out of the global financial system and is the primary cause of ongoing EM currency devaluations. This is not new and you will find much more in-depth explanations elsewhere, but the problem appears to be reaching a final phase that could result in a massive decline in most foreign currencies (or a “blow-off top” in the U.S. dollar index).

Why now? It all ties back to the repo market. The repo market has been demanding to borrow U.S. dollars and none are appearing. The core problem is that interest rates are so low that investors have almost no money in money markets or their savings accounts. “Loanable funds” on the market are extremely low while debt is extremely high, thus it is terribly difficult to get dollars.

In a free market, short-term interest rates would spike and loanable funds would flood back into the market. But the Fed fixes interest rates too low and creates a shortage in the funding market. Thus, the U.S. dollar will continue to rise and EM currencies will continue to fall until the Federal Reserve prints enough money that inflation spikes in the U.S. This will be a major paradigm shift that finally ends the low-interest-rate environment and renews monetary stability in emerging markets.

Put simply, the reason that developed world central banks have not been able to create inflation or economic growth is because most of their efforts to increase borrowing have flooded into EMs. Lowering rates just causes foreign entities to borrow your currency and offsets the liquidity impact of QE.

Overall, it seems that the monetary problems in emerging market economies are still not over. The U.S. dollar is breaking new highs depending on your weighting scheme, and external debt is not being paid off in most countries. IMF debt packages can slow the bleeding but only serve to increase the problem in the long run.

I expect 2019 to end in a large upward move for the U.S. dollar and a downward move for EM currencies that spur another wave of defaults. The Fed has already begun expanding its balance sheet (money conjuring) to create the needed liquidity, but rising inflationary pressures imply it may backfire. Once these monetary problems are resolved (likely sometime next year), I expect the U.S. dollar to crash and return to 2014 levels (depending on what Europe does) and the era of low-interest rates to come to an alarmingly rapid end.

“The Country Club” is a dedicated service that focuses on single-country and regional ETFs with the goal of helping our subscribers diversify globally and get a better grasp on how world events will affect their portfolio. We will certainly be providing subscribers further updates on this idea.

Subscribers receive exclusive ideas, model portfolios, and a wide range of tools including our exclusive “Country Club Dashboard” which allows them to visualize global financial and economic data. If you haven’t already, please consider our 2-week free trial and get your passport to global markets today!